A Yankee in the Canadian Bush -- Animals

Whether I was born with the ability or just developed it due to the circumstances will never be known but within weeks of living at camp it became apparent that I had an unusual connection with animals.

It started with a woodchuck or groundhog. There were a couple of woodchuck holes or dens on the slope between the yard and the lake and I had spotted a brown tail disappearing down one of them. When I reported the news to Mom, Dad and Bill at the dinner table, Bill advised killing the varmint immediately. He then regaled us with stories of how he had "blasted" many of the critters over the years and how different calibers of rifles would make them vaporize.

"You don't want holes in the ground that people can step into and break a leg," he advised.

Instead I had the animal eating bread out of my hand within a week. Even Bill was astonished at the trust the woodchuck showed me. The stocky rodent would stand upright and hold its slice of bread in both paws while I would gently rub its stomach, scratch behind its ears and pet its back.

It was the beginning of what would become Bow Narrows Camp's famous woodchucks. Millions of photos would be taken of the friendly animals as they took treats from the hands of the camp's customers and visitors. Many of those visitors would come expressly just to see the woodchucks. And after 56 years and 20,000 customers, there would be zero broken legs.

The woodchucks would have a litter each year but interestingly, the actual population in the yard never changed. That is because the mom eventually led the youngsters away, one by one to holes she had discovered or made for them away from camp. Two of the most famous woodchucks lived long lives. That first woodchuck, named Woody, lived for about six years. One of her pups, Milton, lived for eight years. Milton was actually female but by the time we found that out everyone knew her as Milton so we continued with it.

Besides the woodchuck, I would go on to tame red squirrels, chipmunks, whiskyjacks (gray jays) and chickadees, snowshoe hares and mallard ducks. The ducks were a mistake -- too messy.

One evening the Ojibwe guides had just left the supper table and called me outside.

"Hey, Danny, do you think you can feed a deer?" one of them asked, pointing to a whitetail doe at the far side of the camp clearing. It was the first deer we had seen.

I grabbed a sugar cookie from inside and held it out in front of me as I slowly walked toward the deer.

I would stop any time I sensed she was going to spook, then ease forward when she focused on me again.

It took about 20 minutes but eventually I was just a few feet away. She stretched out her neck, sniffed the cookie and took it with her teeth before dropping it and sprinting away.

I turned around and there were all the guides, still on the porch. They were all laughing and shaking their heads in astonishment.

Although I had many animal friends I also hunted others. With my parents' permission, Bill bought me a single-shot Cooey .22 rifle when I was just 8. Once my dad had drilled me on safe firearms practices, I took it partridge hunting every day after grouse season opened. I would get dozens of grouse behind camp each year and others when hunting with my dad on nearby logging roads.

I killed my first black bear when I was 9. It was a destructive bruin that was wreaking havoc on the cabin iceboxes as well as the main icehouse. Several of the customers had shot at it and missed and even my dad had missed it. It took me several attempts too.

Dad had a single-shot Savage Model 219/220 rifle-shotgun that was light enough for me to hold up to my shoulder. This unusual gun had interchangeable barrels, a 30-30 caliber rifle and a 16 gauge shotgun. It was hammerless with a top tang safety.

The 16 gauge worked perfectly but there was a hitch with the 30-30: the firing pin seemed not to strike the primer cap deep enough.

With Dad at my side I would break open and close the rifle, sight at the bear and pull the trigger. The gun would just make a "click." I then had to repeat the whole process, break it open to re-cock it, snap it shut, sight and pull the trigger and again, just a click. By this time the bear would take off and we would head into the house.

The next evening we would spot the bear again and I would repeat the whole performance. On the fourth day the gun went off and I killed the bear. Dad pointed out that I had been shaking like a leaf the first couple of days but by the fourth day I just assumed nothing would happen. When the gun finally fired I was holding the sights dead steady. We skinned out the bear and had its hide made into a rug that hung in the dining room for years.

About a week before moose season opened, Bill and his friend Joe Johnson, came for supper and stayed until after dark. The temperature had dipped to below freezing and there was a bright full moon. As we walked the two prospectors down to their boat, Bill mentioned this would be a good night for moose calling.

"Won't you show us how to do it?" Mom prompted.

Bill cupped his hands and made a long, whining sound, moving his head from down near the ground to upright and then down to the other side.

Sometime in the night we were awakened by a shake to the cabin. It had just been one jolt, like from a hard wind gust. But when we got up the next day we discovered moose tracks between the cabin and one of the sheds. There was a bare wire strung between the two that was used for a clothesline and this had been struck by a moose's antlers.

Bill laughed himself silly when we told him what had happened later. He made me a proper birchbark moose call then and showed me how to make his version of a cow moose call. The sound is what a cow in heat sounds like as she advertises for a mate. When moose season came around, all of our hunters and guides had left before daylight on opening day and I took the call down to the dock at sunrise to let go my best imitation of Bill's call. Immediately my Mom and I could hear brush breaking across the narrows. Then a moose with enormous antlers walked out to the lake shore. It was only about 50 yards from the rocky point by the green buoy to the moose on the other side of the channel and I wanted to get the 30-30 but my mom wisely said no. We needed to let one of our customers get it, she said. I didn't argue. I was scared to death. The moose left after a few minutes and no one ever saw it again.

Others in this series

Rough Draft
Bad Ice
Why Here?
A Gold Mine
Talking Bill into Selling
Red Lake in the '60s
First Winter

Hi Dan: Yes you did a good job of training the woodchucks. As late as 1980, we were staying in now Cabin 3, and there were several woodchucks. they would come up and eat pretzels out of our hands, and even come up on the porch at times. Don and I were talking not long ago that we sure did miss the woodchucks, I believe they were washed out in high water in a following year, and we have not seen them since.

Hi Ray,
Yes, that is what happened to them. After umpteen generations of woodchucks we had a cataclysmic summer with "100-year" storms every few days. Incredibly, it ended up killing almost all of the 'chucks. We did see one or two after that but there was no one around to take the time to tame them the way I did way back when.
Dan

My life with the animals

"The animals, they speak to you," Brenda said one time. Two days ago Yesterday  That, in a nutshell, explains me.   I understand ... 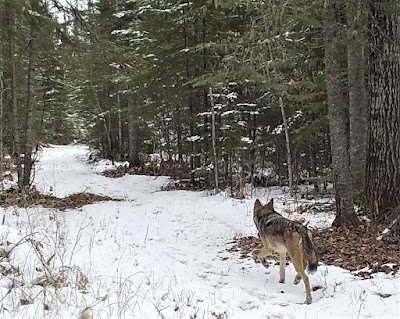